I don't watch much of it, but I have to admit that a guilty pleasure this year has been House Rules, partly because I have always been interested in interior design, and partly because I love Lord Laurence Llewellyn Bowen and have done since I first saw him on his British TV show years ago. 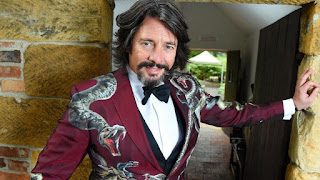 For me, though, the cost of Reality Television is more than just potentially tasteless TV, the likes of 'Married at First Sight' or the dreadful 'Love Island.' Reality TV is helping to shape society. The thing I hate about it (and probably what most people do) is the whole thing with producers pushing people to do dumb things just for 'good' television and the way that cameras hone in on the smallest whiff of trouble. Of course, House Rules has its fair share of this, but by now, decades down the track, I refuse to believe that potential contestants are unaware of this.

Those who are 'cast' as the nasty ones - the trouble makers  - are often heard to complain that its the way that the filming is done, or the editing. According to them, they are just down to earth people like the rest of us. Yeah, I don't think so. For starters, most of us would never voluntarily submit to that kind of exposure regardless of how big the possible reward is. Even more to the point, even if we did apply, most of us wouldn't be selected because we are not young enough, pretty enough, 'out there' enough or whatever. The thing that blows me away, though, is the way people behave despite knowing all of the above - that if you happen to have a dummy spit, lie, cheat or stab someone (metaphorically or otherwise) in the back, the cameras will be right there. Yet they still do really nasty, selfish, underhanded or stupid things. Worse, and this is the kicker, some of these people are parents. One thing these people must know is that the footage of them at their worst is never going away, and even if they are really young right now, at some point, their children will see it.

And so, even if they win the big bucks or whatever is on offer, the ultimate legacy is that they will reap what they sew. If they are selfish, win at all costs, take no prisoner types, so will their children be. And that will ultimately affect us all.
Posted by Ann Russell at 9:52 PM No comments: Links to this post

Another fairy house has been added ro the mix, not far from the entrance to the first one. The thing I like about fairy architecture is that the make use of all sorts of things at hand like pebbles, sticks and moss. What I’m not so impressed with is that despite the fairy population increasing, there hasn’t been an increase in things done ‘by the fairies’ like magical cleaning or gardening. 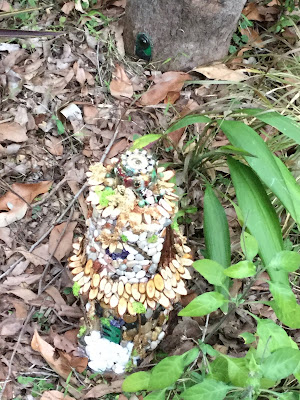 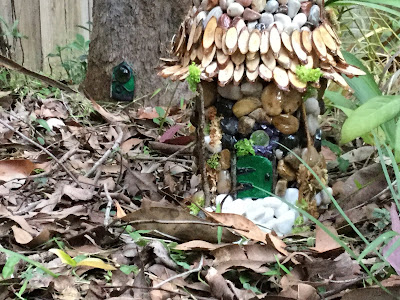 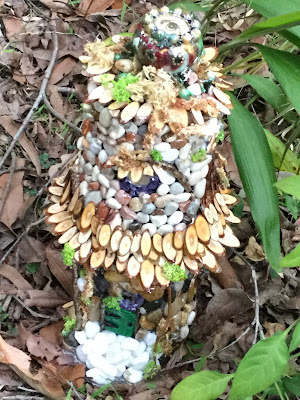 Posted by Ann Russell at 9:48 PM No comments: Links to this post

Over the last few years, I have made a number of gourd birds for people's gardens. I start with the gourd (obviously) and add resin and polymer clay pieces for eyes, tails and beaks. At the end, I coat the whole thing in resin so they are pretty weather-proof and should last for quite a while. These are the latest ones I have made. If you would like a gourd, I will be selling them via my website starting at $50 for a single. I don't have any 'in stock' as yet, so if you'd like one or a pair, let me know. 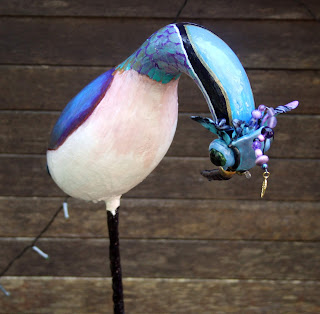 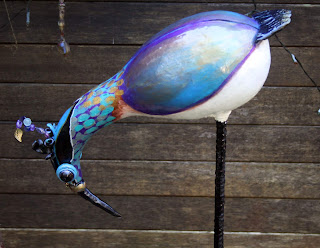 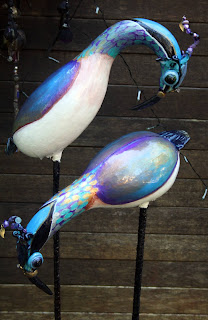 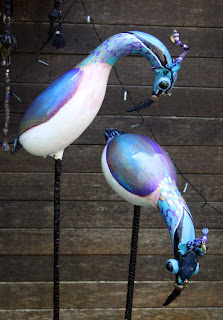