This is a new book I have recently self-published. It is one that has been lying around for years, was nearly taken up by two publishers, but in the end wasn't. I just thought I wanted to finish it properly, hence the decision to publish it. It's a book for kids - probably 8 - 10 year olds. Even though it is self-published, it is a good feeling to see it is as a finished piece of art.
Posted by Ann Russell at 4:34 PM No comments: Links to this post 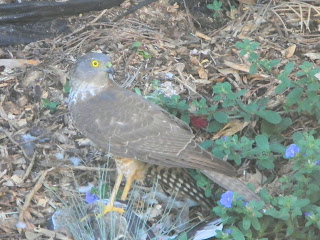 So, today it was a much smaller version of the great birds of prey of last time, but impressive nevertheless. While I was hanging out washing, a sparrowhawk grabbed a resident dove (hopefully a feral spotted dove) and dispatched in the yard. He knew I was there, but wasn't all that put out about having an audience, and I managed to get a few good photos. Amazing.
Posted by Ann Russell at 10:46 AM No comments: Links to this post

So, just finished reading 'the Goddess in the Gospels' by Margaret Starbird which is apparently the basis for Dan Brown's take on Christian History as we saw in 'The Da Vinci Code.' Makes for interesting reading, especially as it follows on (for me) from 'The Dance of the Dissident Daughter' by Sue Monk Kidd. I was brought up in maintstream Christianity to believe in a male God, which has been a constant bug-bear for me. How can half the world's population (i.e. women) be also-rans in a religion that claims to be the salvation of the entire human race?

Can't fault Sue Monk Kidds book at all - it is based on sound research and talks about the way the patriachal church has managed to become the accepted Status Quo. Her book managed to pull me back from the brink of turning away from the church. My only criticism of Starbird's book is that she tends to regard inicidents occuring in America as being universal indicators of the state of the church, which therefore weakens her argument for those of us that live outside the States. Sorry, Margaret, but there it is. Other than that, I have to say, that the idea that Christ and the Magdalene were married and therefore together a truer metaphorical picture of the church makes perfect sense to me. 'Splains alot even. Adds weight to the Biblical declaration that Christ has personal knowledge of everything we experience and therefore understands our throughts, fears and 'temptations'. How can a single, celibate man really do that? So, at the risk of being ex-communicated or burnt at the stake or something, I have to thoroughly recommend both of these books and the ideas they present.

Turns out that the power we have always suspected is lurking in the female psyche actually is; the intuition we've often ignored is a Spiritual prompting and our affinity for Mother Earth is built into our genes. No wonder the patriachal powers that be want to suppress it!
Posted by Ann Russell at 11:58 AM No comments: Links to this post